Back to the old country – more beaches, sunrises and penguin islands

Heading back to Warrnambool for a work trip this week and taking a few days off to make it a long weekend. After three years away from this place it’s still tough to go back and see the kind of places we used to enjoy regularly – the breakwater, Middle Island (home of the penguin colony featured in the Oddball movie) and the beaches less than 10 minutes from town but so often seemingly isolated from the rest of the world. These beaches also used to be hotspots for four-wheel-driving but better enforcement and protection of bird nesting sites has meant that wheel tracks are thankfully harder to find. 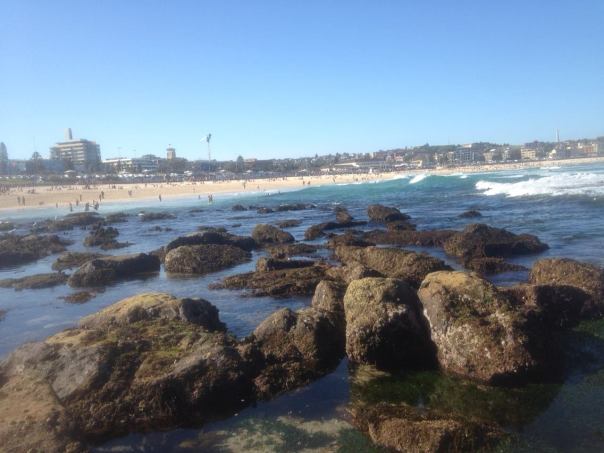 Can’t complain about having too much work lately (and seeing the latest unemployment figures there’s nothing I can whinge about that would gain me any sympathy) and I’m off to Sydney again on Sunday for more World Parks Congress preparation with L’Agence des aires marines protégées (French Agency for Marine Protected Areas).

I was lucky to head down to check out Bondi Beach one afternoon between meetings and phone calls. Growing up in northern Sydney, Bondi was always seen as a tourist beach where us northerners never ventured – now I’m a tourist in my birthplace so can throw out those old preconceptions!

Really looking forward to the Congress and meeting people from around the world who are keen on protecting our land and marine parks. I’ll be back there for three weeks in November, just after finishing my final exam of my Marine Biology degree!!! Hope to get the chance for a few beers to celebrate that and also the exciting news of scoring a new job in Melbourne. It will be sad to leave Warrnambool – anyone who has read this blog will get the idea I’m partial to living down here but with a six-month-daughter now in our lives and better job opportunities in the big city, it makes sense to head back there.

While I’m missing the summer flat spells and warm weather activities, there’s something special about winter on the Shipwreck Coast. No tourists around, fresh cold southerlies and some calm clear days when the whiting are biting! Here’s a few shots of the local marine sanctuary from last week- some heavy downpours have caused the river to flood but the area still looks petty impressive.

Gearing up for World Parks Congress in Sydney

In the midst of my final year of university and having a baby daughter join the family, I’ve also been organising with the French marine agency AAMP to help them out at the World Parks Congress in Sydney in November.

I enjoyed working with some AAMP members in Fiji last year and was keen to join them again for this major event, so hopefully it works out that I can help them with media and communications in the lead-up to and during the event.

In the meantime I’ve been freelancing as an adviser to the Department of Environment and Primary Industries and helping them put together a promotional video featuring their local staff and the coastal and farming landscapes in this area.

Speaking of which, Warrnambool photographer Oat Vaiyaboon has been shooting some great footage with his drone and GoPro, including this recent effort:

This is a great recent video from the Friends of the Merri Marine Sanctuary, a small and dedicated group helping – as one goal – to remind local people about the amazing natural features and marine life on their doorstep.

At a lecture and networking day on the weekend hosted by Deakin University and the Victorian National Parks Association, a member of the Friends group mentioned how hard it can be to get the support and interest of people outside the conservation community. I could see similar parallels with another spectacular  occurrence that Warrnambool people often ignore.

Living near one of the calving grounds for southern right and humpback whales, people in this area can tend to be ambivalent about the excitement generated in the tourism industry each time the whale watching season approaches.

A recent humorous list of 30 things only a local would understand had this gem at number 23:

Funny (maybe just as a Warrnambool local) but it highlights that disinterest I spoke of – we’re happy the whales are here but we’re just as happy to ignore them because it doesn’t suit us to stand around for hours (and it can be hours between ‘showings’). Same goes for conservation – local people are generally happy that someone is doing it but not bothered to get involved themselves.

What can you do with apathy like that? It was an open question to the weekend’s session and though there were some good suggestions, as usual it was hard to come up with the perfect answer. My idea was to keep the good work these people do at the forefront, tell the media, tell politicians, help to get relevant policy change at the state and federal level and let your own passion inspire other people. Al Gore was one who helped ‘cure’ apathy over climate change on a global level but it’s even more important to make small communities like ours care about the natural wonders they take for granted.

Over the summer, I helped out on the Marine Summer Ranger program that Parks Victoria run across their land and marine parks. Locally, where in live in Warrnambool on the south west coast, the program involved rockpool rambles in the Merri Marine Sanctuary.
This is an area that, from anecdotal reports, was close to being overfished as the population of the town increased from the 1970s to 90s. One of my Deakin University lecturers shot the video above that shows the health of fish and crustacean stocks in the mainly shallow water protected area.
Sweep, magpie perch, salmon, wrasse and zebra fish can be regularly seen in the park, as well as some of the larger crayfish around this area. Commercial cray boats commonly target the borders of the marine park but it is good to see some larger specimens in this video still hiding under ledges throughout the park.
The New South Wales government is trying to wind back protection of some of the most important marine parks in their state, upsetting conservationists and local people who can see the value of large no-fishing zones. Fishing trawler captains may welcome the reduction of marine parks but as usual it will be a short-term win for them versus the possible longer term goal of allowing fish stocks to recover. 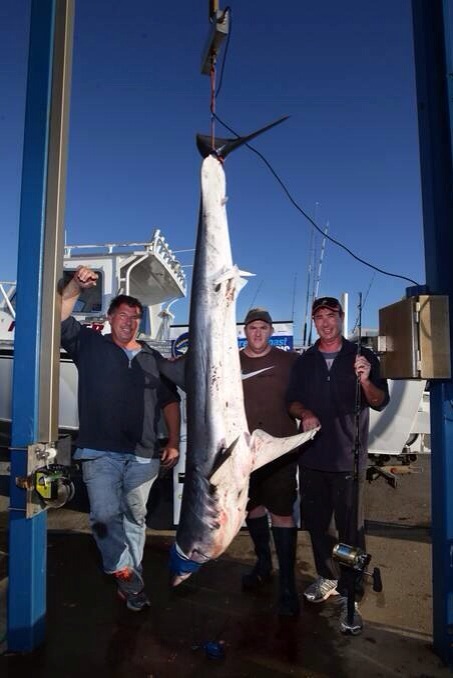 Around this time last year, fishermen were hanging up their prize catches in a big annual fishing competition here in Warrnambool.
One of the fish that brought the biggest crowd was a 110kg mako shark- a common enough catch in Southern Australia but still of concern given the huge global exploitation of various shark species.
The Standard newspaper posted this photo yesterday of an 81.3kg mako from the first 2014 competition and it looks like nothing has changed – same happy crew posing with a trophy shark that may win them more praise than competition prizes. Catch and release should be the protocol for fish such as this: get the photo on the boat, have it signed off by judges and leave the fish in the ocean. The article stated that fishers in the competition had caught “several sizable Mako sharks”.
A local fishing group has been criticised lately for its targeting of unnecessary species for competition points, criticism that was definitely warranted. I attended one of their club meetings recently and a few members were complaining about fishing restrictions that stop them racking up points for certain species. Given that one member caught more than 30 fish in two days, some of which were inedible or destined for the closest rubbish bin, their whinging seemed pointless.
These groups may slowly understand the effect of their ‘overfishing’ when they pull in less the next year or have to hunt harder for elusive species (just like the global commercial industry). 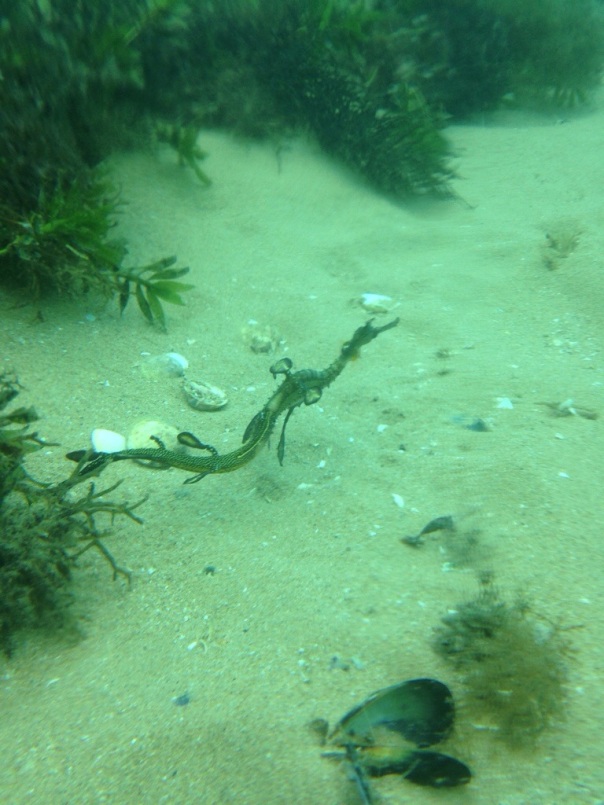 Seal pup all grown up!

Spotted this seal and his mates a few months ago hanging around the marine sanctuary. It wasn’t long before one of them worked out that begging for fish in front of the pier is an easier way to get snapper carcasses and other tasty leftovers!
Seals in this area don’t have too much to worry about: the larger colony at Lady Julia Percy Island has to contend with a variety of sharks including makos and threshers and the occasional opportunistic orca.

I was walking with my favourite Park Ranger yesterday on our usual wander near the Warrnambool Breakwater (the long stone wall in the background of these shots) and noticed a crowd around the weigh-in scales.

At first I thought one of the local tuna fishermen had hoisted up a decent fish for the benefit of tourists (who usually don’t appreciate the plight of the southern bluefin, but that’s another story). On making a path through the onlookers, my partner and I were pretty horrified to see a 110kg mako shark on the scale and a few impressed fishermen boasting about the catch.

Of course fishing for various shark species such as mako (Isurus oxyrinchus) and gummy (Mustelus antarcticus) is still legal in Australia (limits vary by state and territory) but hearing one fishermen state this was a “common shark in these waters” made me cringe: they are still heavily fished and listed as Vulnerable on the IUCN Red List.

Hanging one up in front of a crowd helps continue the “man vs shark” stereotype that is continuing to push down shark numbers worldwide, whether for commercial or recreational purposes. Sizing up the shark when it’s caught, using circle hooks and operating on a catch-and-release basis is the only way to go for maintaining healthy shark populations.